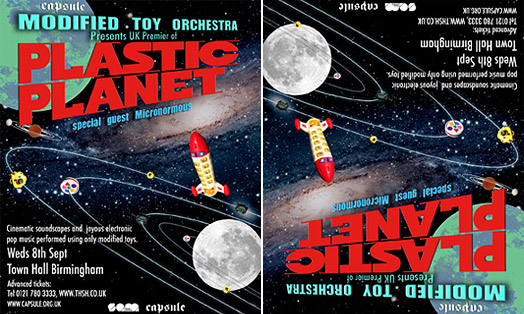 I went to see the Modified Toy Orchestra on Wednesday night at the Town Hall, Birmingham. I felt compelled to write a few words.

Despite my interest in circuit bending and electronic music I had only heard of the Modified Toy Orchestra prior to my time in Brum. My interest was sparked further when it became clear that they attract nothing short of hero status in Birmingham, so I dug a bit deeper. Everything I read and heard built my interest, although I must confess to initially, slightly jealously, pondering what the big deal was. It was just a bit of circuit bending, right? WRONG!

The Modified Toy Orchestra does two things very well. Firstly, they take circuit bent instruments and toys and make great live music with them. That’s not easy. Making interesting noises is one thing, using them in tunes in the studio another but creating fully fledged compositions and an immersive live show is something far above and beyond that. Secondly, they do FUN. I was like a child; reminded of the time my grandparents took me to a Shakin’ Stevens gig in Leicester, where I nearly broke the seat. OK, I wasn’t jumping up and down this time, well, I was on the inside! Personally, I think fun is underrated in music / art. I try to add a big dollop of fun into most of the stuff I do. Glatze especially has a balls-out, fun-at-all-costs mentality, which I know isn’t everyone’s cuppa. I would warn anyone who doesn’t like having fun to avoid the Modified Toy Orchestra.

Ooh, I just thought of one last thing, Brian Duffy has a charming stage presence which shines throughout their performances! Big up Brian, the Modified Toy Orchestra and Capsule for finally bringing them home.