As part of the Worcester Music Festival I was lucky enough to visit Organ of Corti last weekend, a project by Liminal. I also attended the “Meet The Artists” event on the previous day. 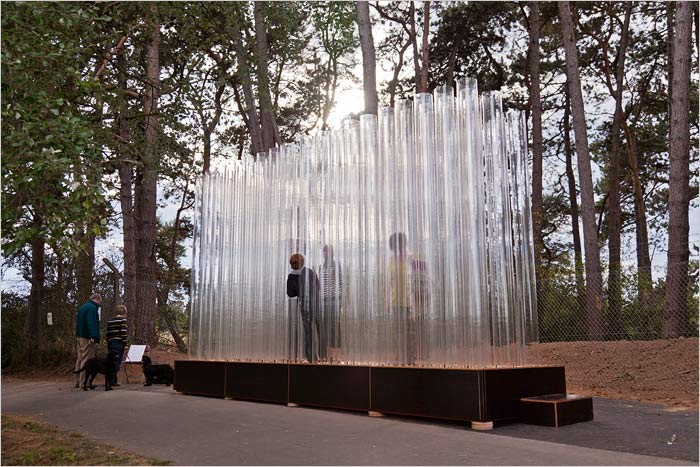 I became aware of this project some time ago and was chuffed, to say the least, when I realised it would be visiting Worcester. It transpires that Diglis weir was actually the place initially chosen to sight it. A real bonus for me as it gets a little tedious when so much intriguing stuff of this nature requires an all-day round trip (at best) to witness it. The weir is only a bike ride away.

The presentation on the Friday night gave a really fascinating insight into the project. Rather than me trying to go into much detail about what was covered, check out the Organ of Corti page for an overview. Based on what we heard and saw, in terms of the science, images of the piece and the enthusiasm of the artists, I was keen to experience the piece myself.

Before I come back to that though, David Prior of Liminal mentioned a project by one of his former students, which I had to mention, as it’s a real gem. He took four drummers, each playing snare drums, and spaced them along a path into the distance. He then conducted them with a semaphore flag from next to where the audience stood. Each player hit their drum simultaneously but given the (carefully measured) space between them and the time it took for the sound of each drum to reach the audience, a recognisable rhythm was created. The players then walked to the next designated spot. As they did so, the rhythm got jumbled. On reaching the next spot another recognisable rhythm was formed. The players ultimately ended up by the crowd, still playing in unison. Great idea that! Anyway, I digress…

On the Saturday I visited the piece by the weir. It is a stunningly beautiful object. I read the description and instructions and tried my best to get myself into listening mode. If anything I generally listen to stuff too closely. For example, I’ll get distracted from a fascinating interview by a squeaky shoe. I gathered myself, listened deeply and entered. The first thing that struck me was a shift in where I perceived the sound to be coming from. All of a sudden it seemed to have shifted to emanate from the piece itself, directly in front of where I stood. This was something I hadn’t expected. 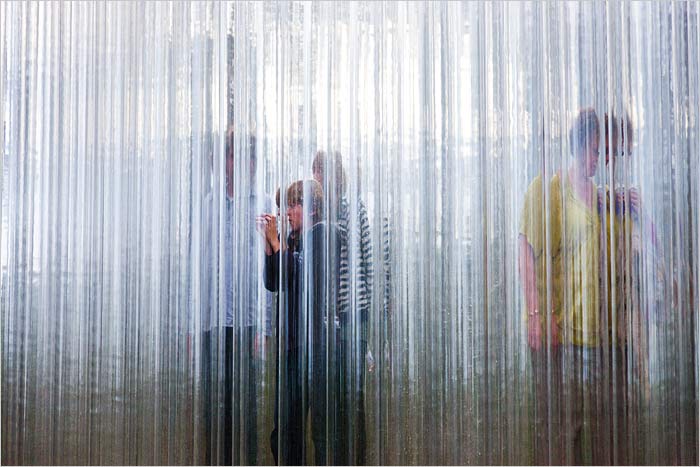 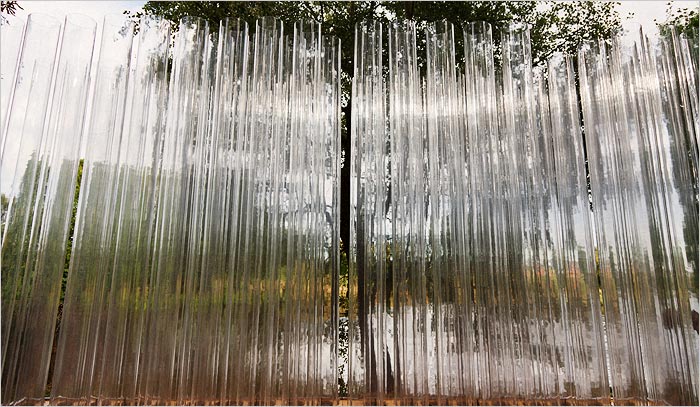 I passed from right to left listening to the distinction between different parts of the “sonic crystal”. I could definitely distinguish changes in the frequencies of sound I was hearing. The weir was chosen as the site due to the wide frequency range it produces, in an effort to highlight the effect.

I did some sound recordings to try to illustrate what it sounded like. The first is from outside the Organ of Corti, the second from just inside, and the third is a “fly-through”. They were all somewhat compromised by a mixture of me forgetting my wind sock, not having whatever the audio equivalent of a steady cam is and by people talking and making sounds…but I think it illustrates the effect to some degree.

Note: these are quite noisy!

I must admit I was left wondering how different it would’ve been if I’d walked behind / into something else. The animation we saw on the Friday evening suggested that the specific form of the piece was vital to the effect. I can’t say that my ear is well trained enough to be confident of this. I understand this version of the piece is due to be used as a research tool for a period now. I’d be fascinated to hear what comes of this.

It’s great to see such projects in Worcester. I hope this piece and pieces like it are given a permanent home here. Only the other day, on seeing a photograph of the Worcester skyline including the new Worcester University Library & History Centre, I remarked that it’s stuff like this which makes for a truly international city. The same applies to the quality of the art that resides in the city. More please!