Next month, I was supposed to travel to EMS in Stockholm for a week as Guest Composer. What an honour. EMS is nothing short of seminal in the world of electronic music, and this year it celebrates 50 years. Despite this I have had to courteously turn this opportunity down…for now.

There are two main reasons. The first is practical. The second is more fundamental and holds greater sway in my decision not to go. The first has to do with money. I applied for this with my colleague David Morton but we were unsuccessful. This would’ve left us in Helsinki and would’ve given us some budget to help make our trip to Sweden more viable. We sought other funding and assistance with the trip to no avail. Somehow things didn’t seem to want to drop into place.

Crucially though, a second aspect wouldn’t drop into place either. David and I just couldn’t work out what we were going to EMS for. At first we thought we’d try to get some time with some rare synths but then I recalled the frustration I felt when using a Synthi at Sonic Weekend earlier this year – and the relative ease with which Soundhog handled it. It’s just not my style. I am a tuba payer; you press an oiled valve and it does the same thing every time. I really enjoy playing with hardware synths – though I am much more at home with soft-synths these days – but I don’t very much care for the results when I hear them back. Endless, aimless synth noodling isn’t really my bag. So, that idea went out the window.

Next up we considered taking our instruments with us but the idea of checking relatively fragile instruments was daunting and why would we go to Sweden, to an electronic music studio, to record acoustic instruments using mics and software we are unfamiliar with? A sense of adventure and the unknown is fine but that just seemed perverse to us.

Latterly we got close to an idea that could work; one we had initially pitched for Sound Development City as it happens. We would do another Field Augmentation album in and around Stockholm. We would prepare the augmentation tracks at EMS and do the listening back and some initial post-production there. BUT why do this in Sweden? We needed to find some striking acoustic spaces and organise access etc. Time was running out though and the research and organisation required to pull this off to our satisfaction was non-trivial – so we took the decision to pull out. Given the desirability of their studios we wanted to give EMS sufficient time to book the studio for someone else to use.

We plan to carry on researching spaces and funding options for a trip next year – if EMS will still have us – but this time we just couldn’t make it work; above all artistically. Someone I mentioned this to said it “might just turn into expensive faffing, and you can do faffing anywhere”. Sage.

[addendum: when posting this article via Twitter I boiled it down to this phrase, which seems to sum things up pretty well: “Basically, the art bit has to be right…or what’s the point?”] 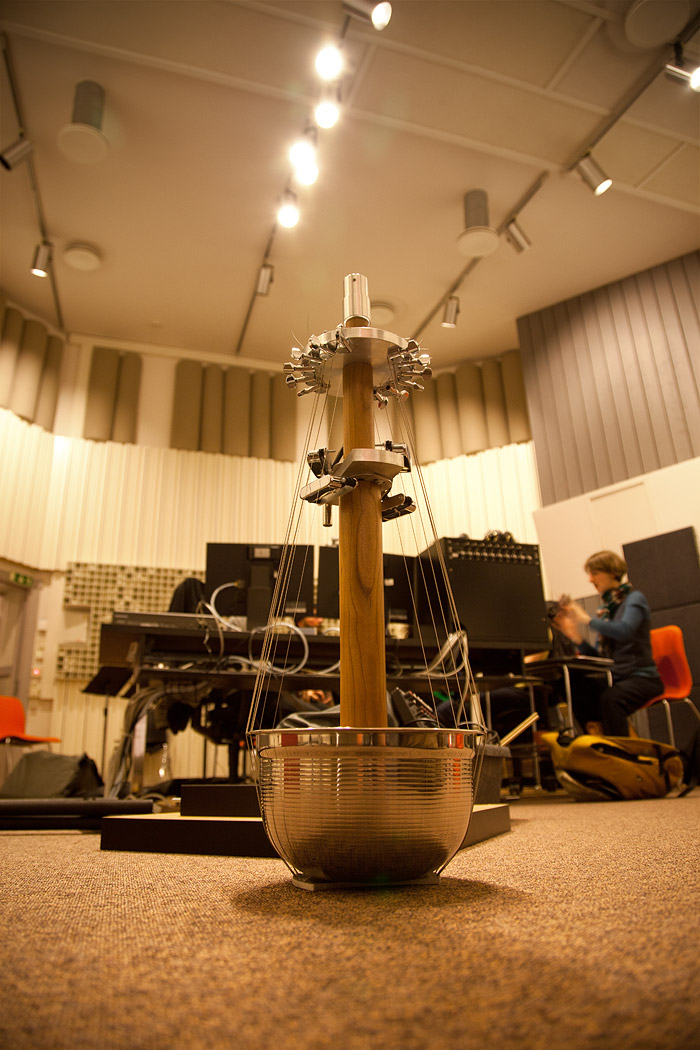 Images from EMS trip in 2012 with MU1 One Water instrument