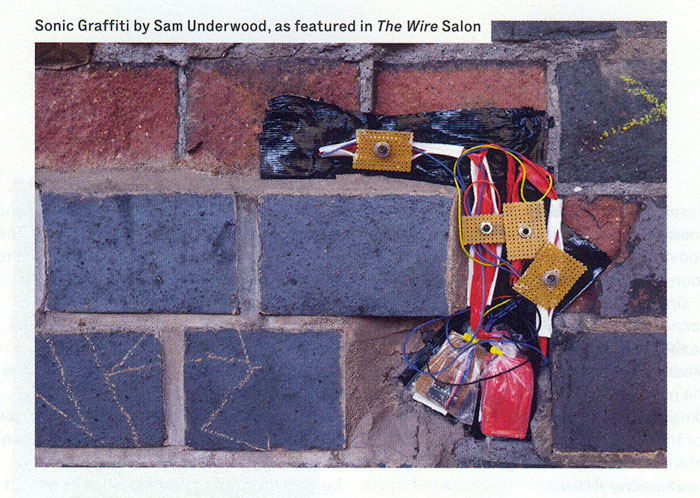 I was recently asked to appear on the Wire Salon panel at Café OTO, entitled The Ways of the Hacker. A real honour. The other panellists were Tom Bugs, Leafcutter John and late addition Kirsten Reynolds

I got down there and set stuff up. As usual, the fact that I tend to spend less and less time in front of a computer stumped me a little in getting up and running but I still managed to do so in a timely fashion. Frances (Morgan – who led the discussion), Tom and John popped for some food whilst Kirsten and I popped to get some cheap water from the shop. With hindsight, maybe some food BEFORE the Westmalle Tripel might’ve been a good idea but at least it got me in a chatty mood.

Despite the liquid relaxant, when I saw how many people had come I was rather nervous. I had been forewarned by Richard Whitelaw of Sound and Music when I met him earlier in the day that it can get packed but I was used to such events attracting less punters than panel members. My pre-conceptions couldn’t have been more wrong; twas RAMMED.

The discussion started with each of us having an opportunity to introduce ourselves and then later our projects. I had prepared a few slides to show people and covered my Sonic Graffiti project when prompted by Frances. I wasn’t sure whether I’d get the opportunity to outline other aspects of my work but I hoped I might later on…

As it turned out the discussion was free-flowing and even reasonably intense at times. Some themes which I consider to be reoccurring in my field came up, including: how technology for the sake of it is no answer, how performance is key in live electronic music (and how our approaches aim to address this), how we earn a crust doing this stuff etc. It was a good debate with some interesting questions afterwards. The audience seemed pretty into it and hopefully it will be put up here in due course too: http://www.thewire.co.uk/audio/in-conversation/ (a source of much inspiration)

Afterwards, I hung out with Kirsten some more, Jo from Badtiming and my dad; who had come up from Cornwall for a couple of days in London with me. A few people came up to discuss stuff but they seemed more wowed by Tom and John’s lovely boxes. Understandable, they are lovely!

A great event I thought. The only change I would make is to have a better overview of how things might run and how much time will be given to different bits. I guess that’s hard to predict, however Frances did mention that due to some stuff not being fully covered she is considering holding a Round Two of this discussion to tease out a few more thoughts. There was plenty more scope, so that would be fantastic!

Lastly, apart from the boost I got from being asked to participate in this, (Leafcutter) John took time to say some very nice stuff about my work after the event. He identified a purity of approach in my practice. This is something I consider really central to what I do, so it was great to have someone like John spot this. In general, given how new I am to doing this stuff full time, it was very heartening to start to feel I was amongst peers at such an event, especially given that Tom Bugs was a notable influence in me starting out with instrument building!

Lastly, lastly, I’d like to thank Frances and Tony of the Wire magazine for inviting me.