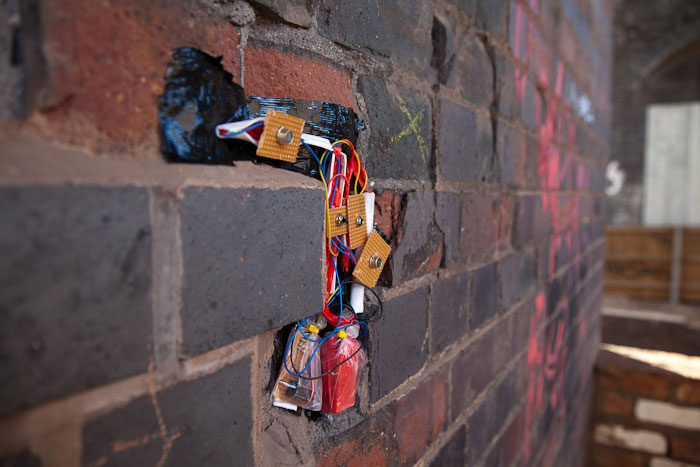 I was recently commissioned by VIVID and Capsule to produce and install eight pieces of Sonic Graffiti in Digbeth, Birmingham. These are sound objects, embedded in the built environment. The commission was split between four pieces that featured the “Crash EP” of music inspired by field recordings taken in the area and four others which were more “playable”.

I have created such sound objects in the past. I’ve always just left them in random places, often while away on holiday etc. For example, you might visit the toilet in a library and find a small voice recorder that encourages you innocently to “Leave a nice message for the next person”. They were always transient in nature, lasting only until the battery ran out, or until someone vandalised or stole them. I never really cared whether anyone ever found them.

What follows is the story of how these came about, the successes, the failings, and the people I met along the way…

Initially, this idea was pitched to a different arts organisation locally. It was (only just) unsuccessful but ultimately this process was very helpful in me developing the idea from the throw-away level it was initially. In completing this pitch I decided that my ideas and standing alone might not cut the mustard so I contacted Nikki Pugh. Nikki had already expressed some interest in the idea and moreover she’s bloody brilliant! I took over a very rough outline and then we sat in her flat chatting for a couple of hours. She added more to the project in that short time than I had in hours of aimless pondering. Partly this was the power of discussing stuff but mainly it was the power of Nikki. The thing Nikki does well is adds ideas that are grounded on some reasoning, dare I say some artistic justification, which is not something I excel at. As the project didn’t go ahead through this initial pitch, and as Nikki was in New York for a while, we never got to work on it together…but my thanks go out to her for her influence on the project!

When VIVID were looking for artists for their exhibition Crash, it seemed immediately obvious to me that Sonic Graffiti could be a good fit. In fact that had already crossed their minds, so I developed the idea further to angle it towards Crash better and I was commissioned to complete the piece. Capsule played a huge part in securing this for me too. I have been really lucky to enjoy support from Capsule throughout my sabbatical. They made the initial link between myself and VIVID for this project and they also co-commissioned the piece, so that it included the four extra, more playful, pieces.

By this point, what we were looking at was four pieces featuring music inspired by and based around field recordings made in Digbeth, and four synths / noise boxes that could be triggered / played by individuals or groups of people. I only really had a hunch that much of what I had proposed could be achieved. I don’t know if this is how most people work but it sure keeps the excitement (stress) levels up!

So, the first requirement was some expert advice. I had some wacky idea of potentially getting some custom players built by Sonodrome. They are a clever bunch, so I gave them a call to discuss the project. Jim from Sonodrome was very helpful, as ever. He reminded me of the golden rule for hackers: don’t re-invent the wheel! He suggested I buy some cheap bits off Ebay and get inside them to see if they do what I want. This is exactly what I did and stuff built from there.

So, I was dabbling with cheap mp3 players, DIY headphone switching, circuit diagrams for touch switches etc. Things were going ok BUT there came a point where I again found myself in need of some assistance. I was starting to worry that my bodging might not result in the most reliable outcome. Enter David Morton!

I had met David through Twitter a short while ago and I proposed the idea of him helping me by teaching me more about electronics. This resulted in an epic and thoroughly enjoyable 2hr telephone call, through which I realised that David was not some young synth-head but in fact an aging electronics guru. An ex-BBC research engineer, you know, a proper geek. Someone with some real skills and luckily someone of a charitable nature who was willing to help out for the hell of it. Suddenly things got serious! David set about reworking a number of the bits I had bodged, including the switched headphone socket, which he feared could do damage to some very expensive headphones. David is also a damn good recording studio tech and he helped us with our ORE micing issues, but that’s another story.

After LOTS of twatting around (technical term), soldering and crucially water-proofing, I finally arrived at my final set of eight Sonic Graffiti pieces. Each one had a distinctive approach in terms of the installation, what was required to make it work, how sound was emitted etc. 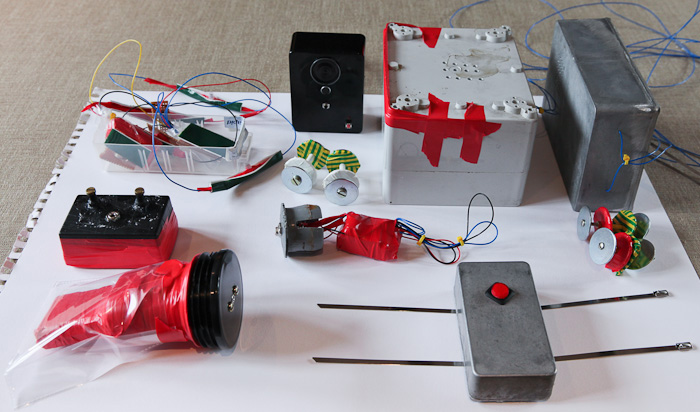 The installation day was manic. I was well prepared but there were lots of unknowns. I was more confident of my electronics than I was of my ability to mortar stuff in place or scale massive hoardings.

I got off to a bad start by setting up my ladder right in front of a nearby police car. They clearly thought I was inept rather than a threat. Actually, I had cleared the project with the police as I wasn’t keen to be responsible for closing all of Digbeth due to my scaling of walls with a rucksack full of electronic devices.

Below are some pictures of the installed pieces. 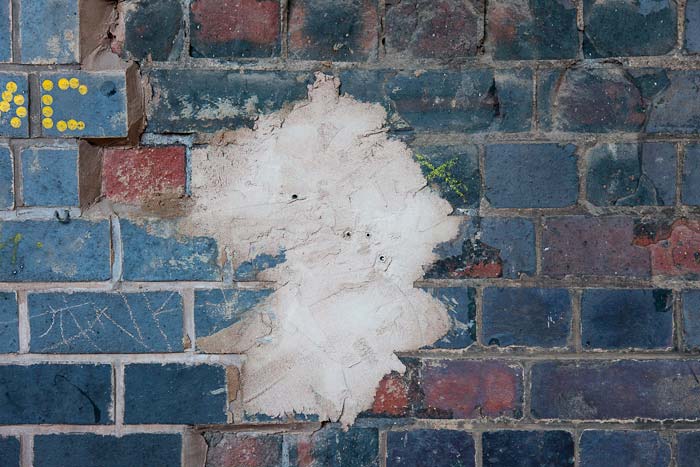 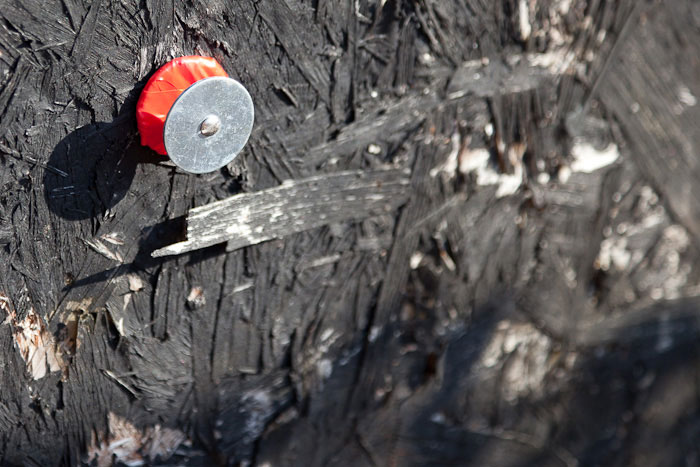 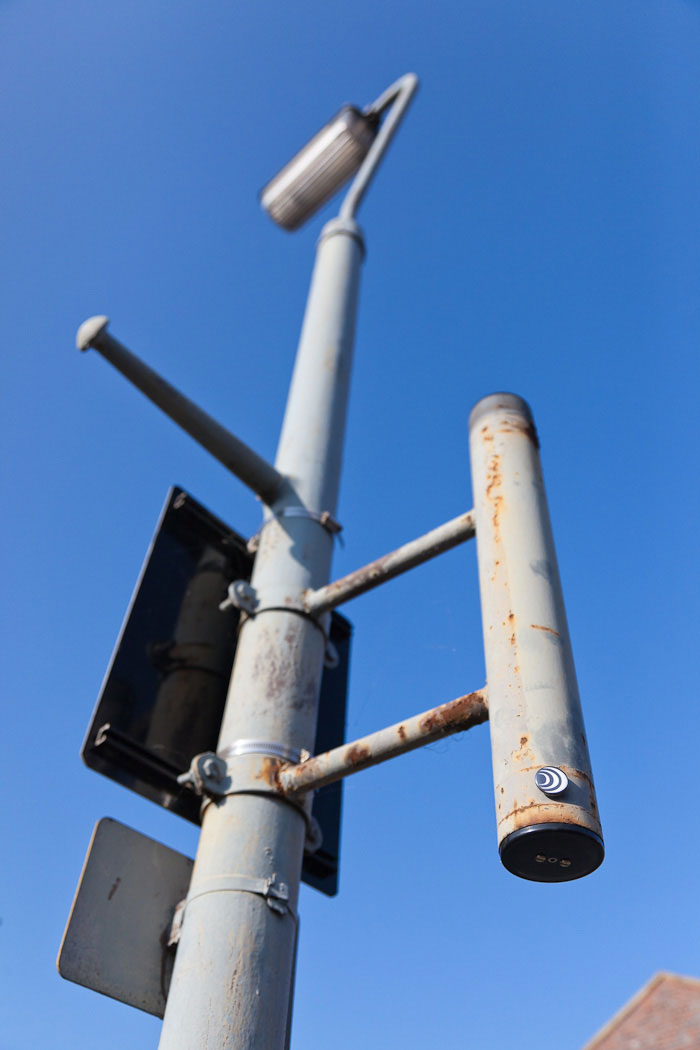 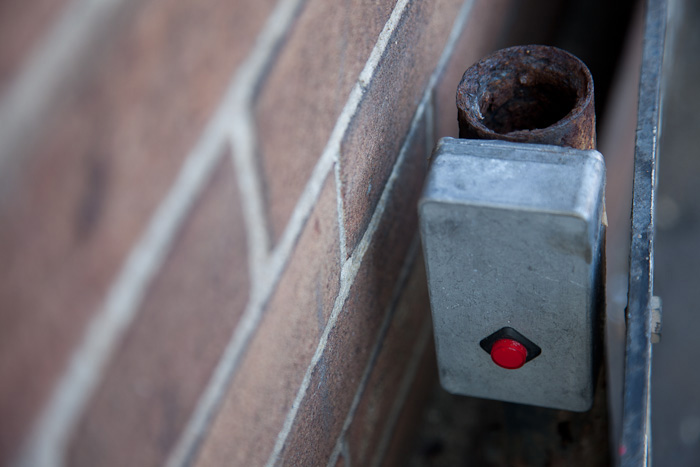 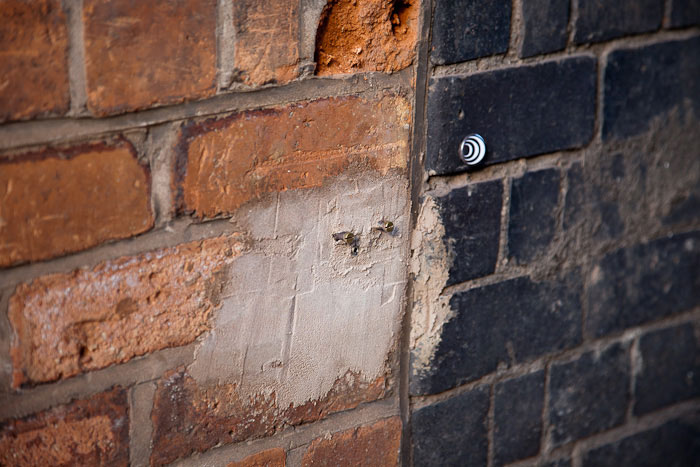 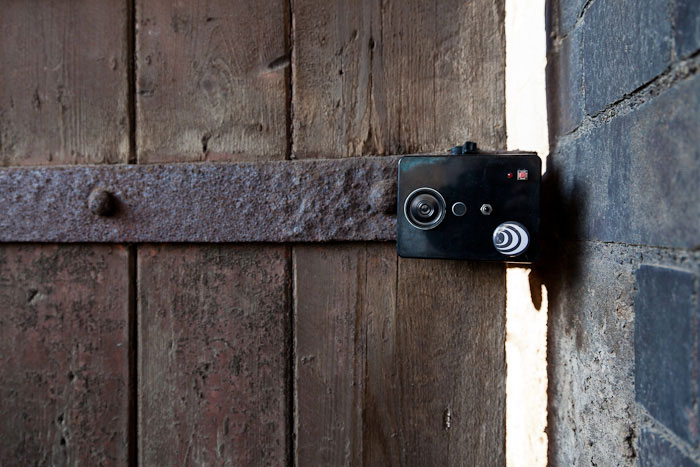 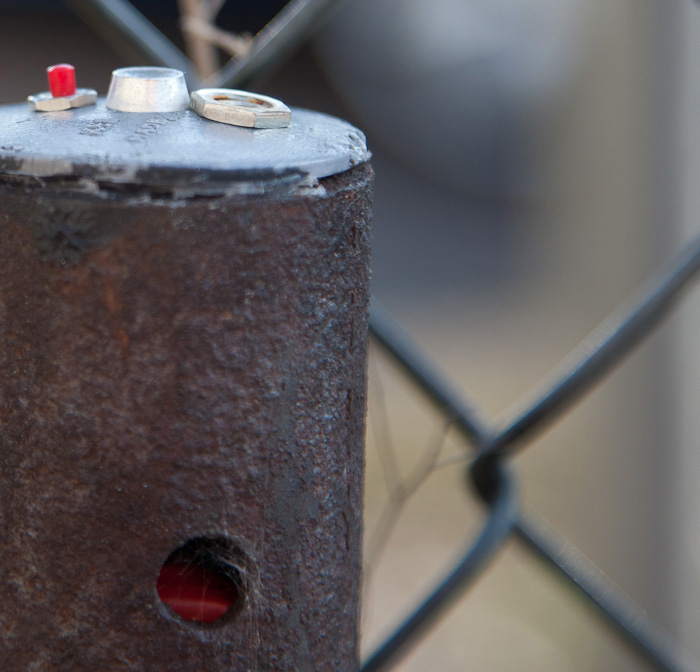 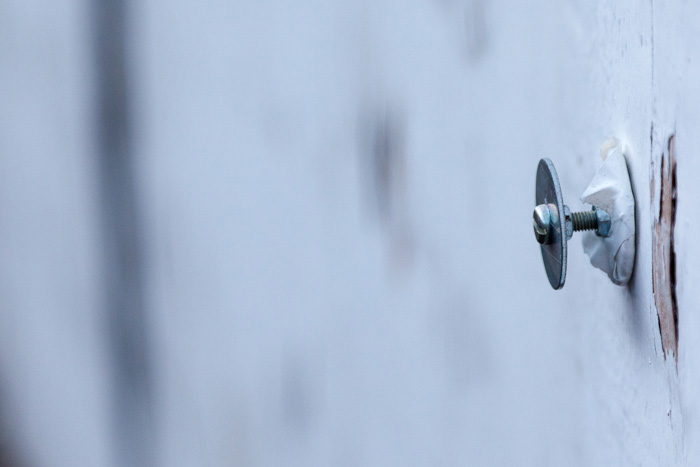 As part of this project I gave a number of short walking tours, through which I highlighted two main pieces. In fact, we walked past 5 pieces in total but it was my aim to make people work for their sonic art ;)

These tours took place on the Crash exhibition launch night and as part of Supersonic Festival. After the tours some images immerged of people enjoying the optical synth in a wall and the touch-sensitive audio player in the hoarding. Thanks to Callie for these! 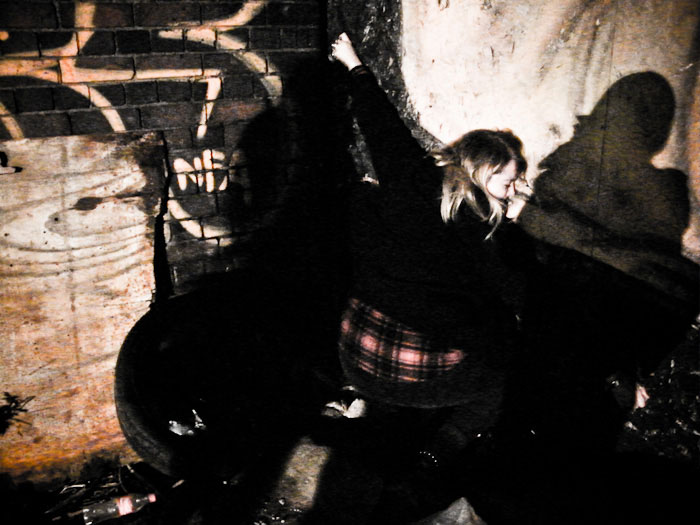 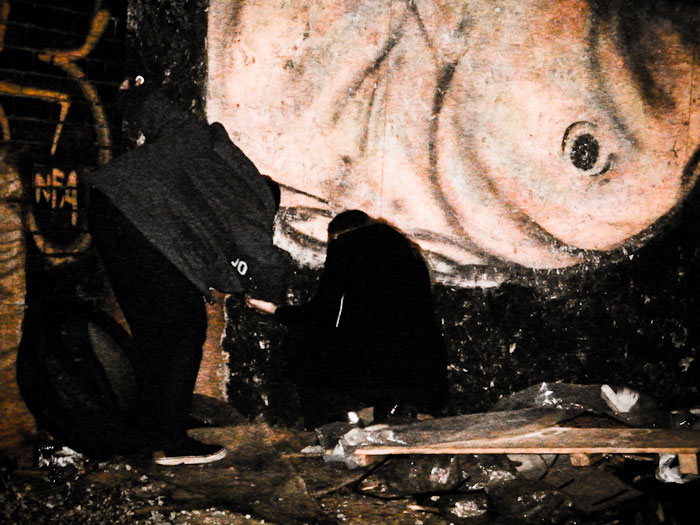 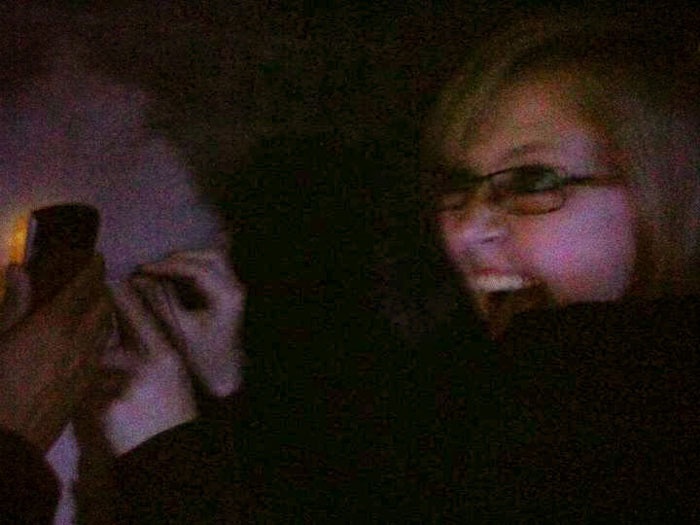 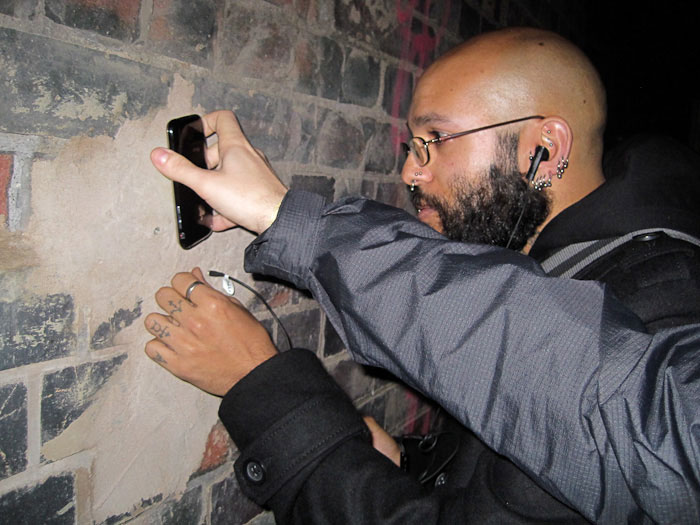 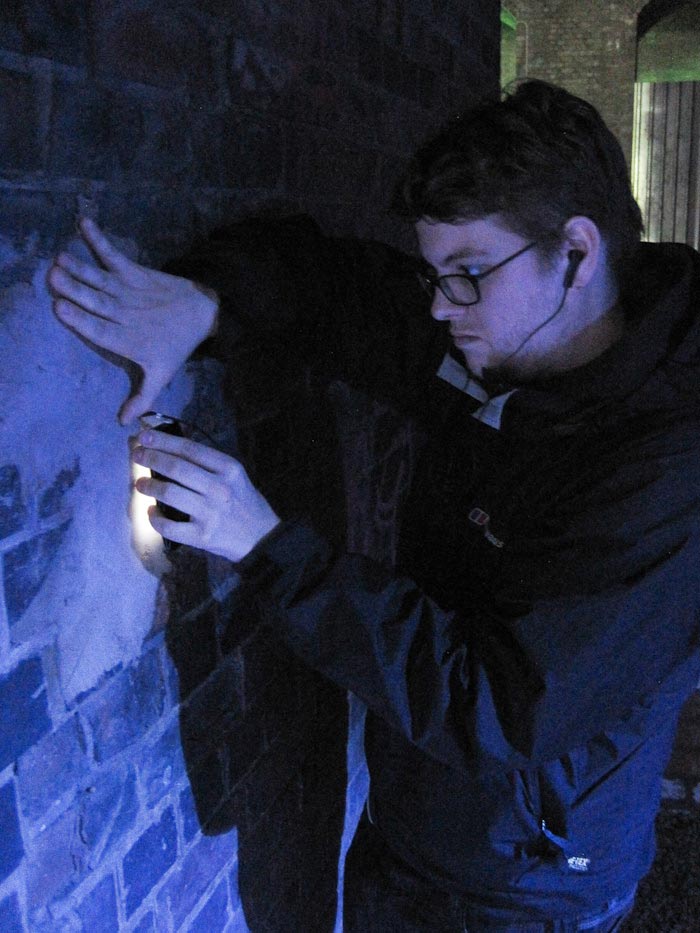 Overall, I think my Sonic Graffiti project was well received. Aside from various positive comments, it gained favourable coverage on local arts blogs etc. I was also pleased that the BBC Culture Show chose to feature it as one of their things of note in Birmingham.

I’ve popped recordings of this and the full piece on Birmingham on the Sonic Graffiti micro-site. Thanks to David Morton, again, for capturing these.

This was new to me. For once I had to take care of my creations. Two of the eight pieces were “allowed to fail” but the other six had to be maintained. As it happens, even the one that had water run through it each time it rained managed to last for four weeks!

Due to a surprisingly robust design and build, maintenance was really just a case of going round each of the pieces and administering minimal roadside tweaks as appropriate. Some badges to indicate where the pieces were needed to be replaced and one vandalised piece needed a bit more attention but overall the burden of maintenance was smaller than predicted.

This too was easier than predicted. Yes, it involved some clambering over stuff and some hacking out with the wrong tools but it was over in a flash. The crucial thing now is to assess what’s left , what failed and what can be improved for next time. 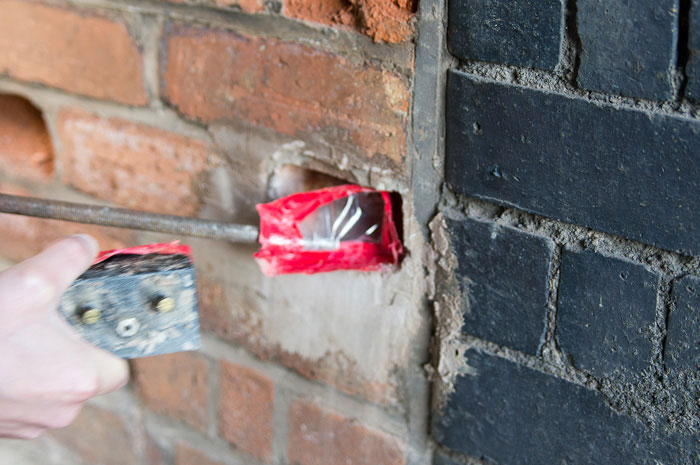 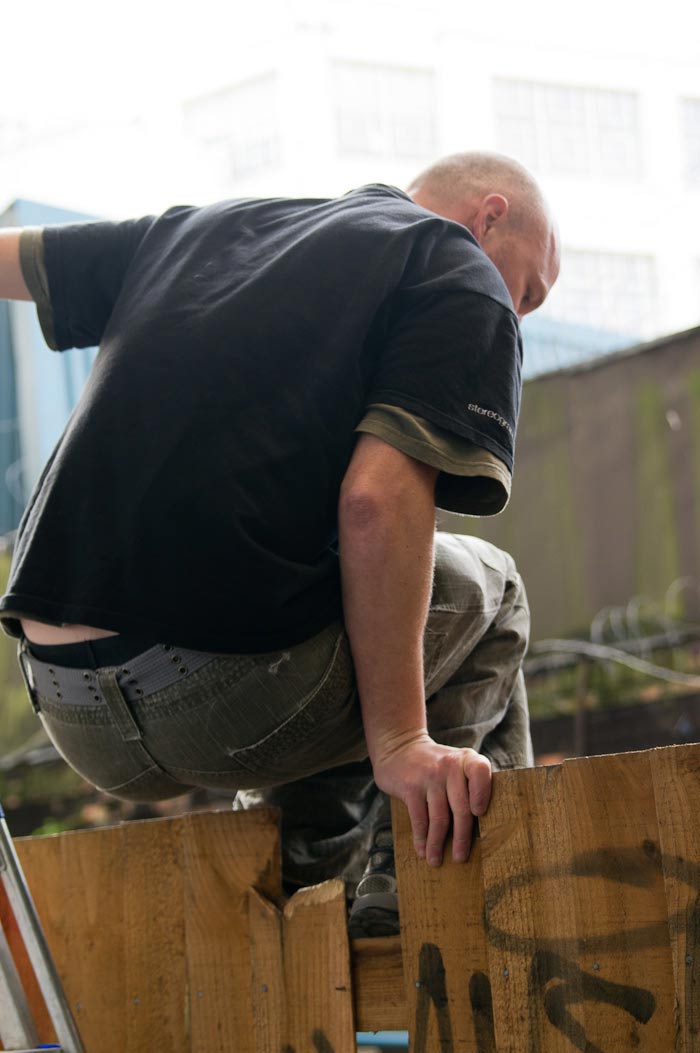 So, that was my first formally commissioned Sonic Graffiti project. It went really well but I find myself genuinely torn as to where to take it next. Part of me wants to reclaim it as a bit of fun, transient in nature and low maintenance, whereas part of me wants to build on the success of this project and make some really impressive pieces on a bigger scale. The likelihood is that I will go back to popping small pieces of Sonic Graffiti in toilets countrywide, whilst also working on developing technologies for scaling this project up. Either way, I will be doing more of this!

As part of checking the pieces each week to see whether they still worked I would see if anyone had recorded a message on the (very hard to find) “Play / Record” piece. Every time I was disappointed. That is until I came to remove it, when I found this message on it.

P.S. *whispers* I’ve left one piece of Sonic Graffiti in place to see how long it lasts. So far so good!