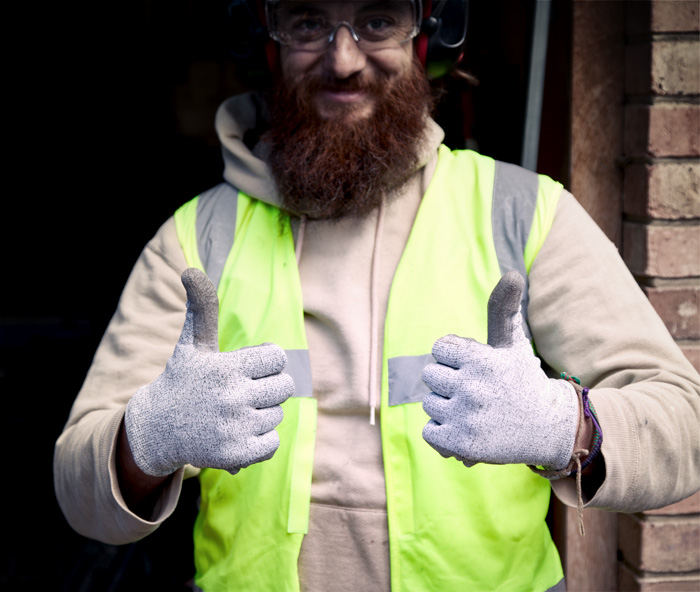 Week commencing 11th May
As you can see from Phil’s face and thumbs, this week went pretty well. We got a serious amount of the production sorted, resolved a few issues and generally got a lot closer to finishing the thing. My role was sourcing the advice and parts we’d needed, consulting with Phil and holding/shifting stuff as required, trying to find someone to document it and making coffee; all of which I did! Phil just cracked on, as he does, with the making!

The main thing that remained outstanding at the end of the week was the lack of the main stage / plinth, which was a nightmare as that’s what it is all constructed around. I was chasing like mad but it still hadn’t arrived by the Friday. Somewhat stressful. 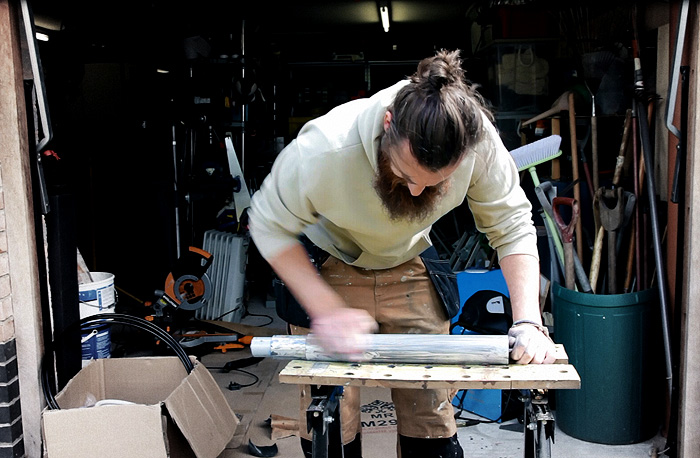 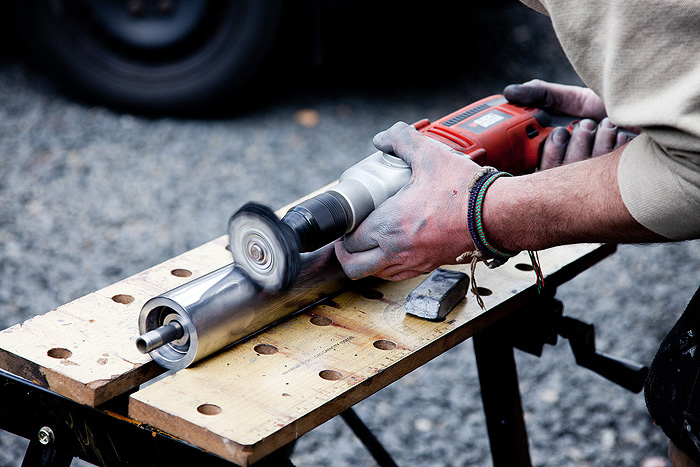 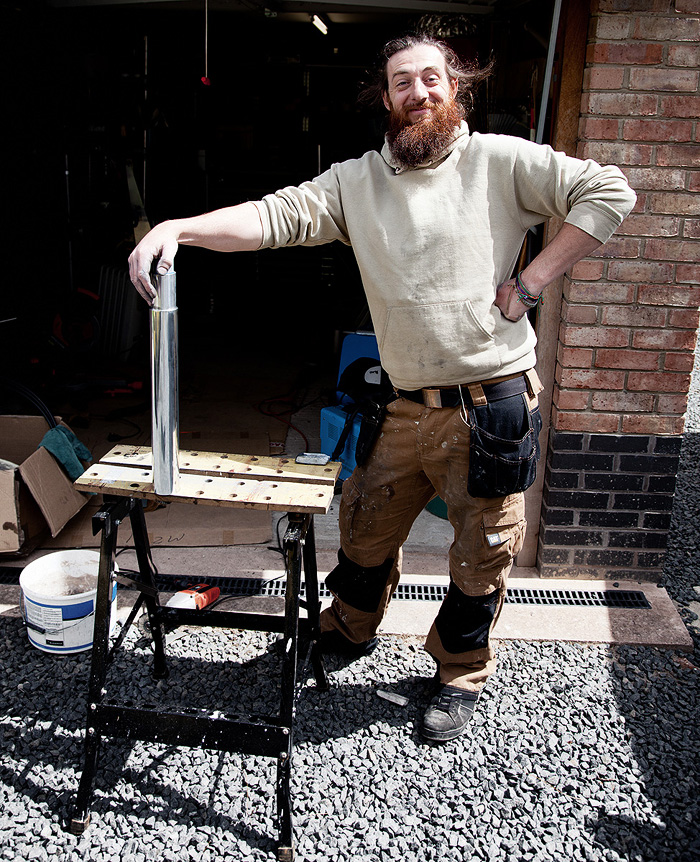 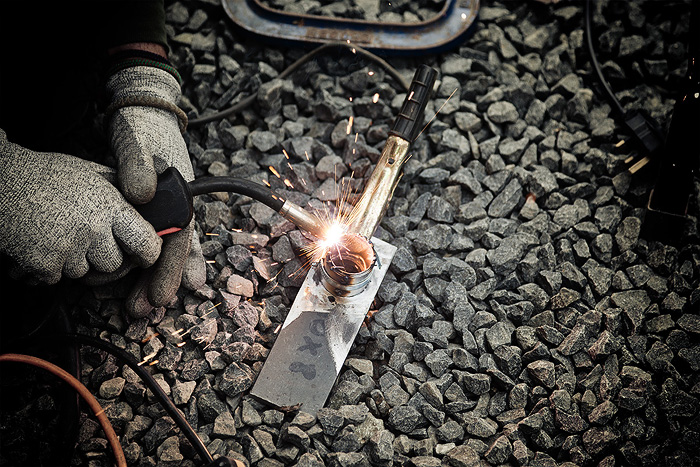 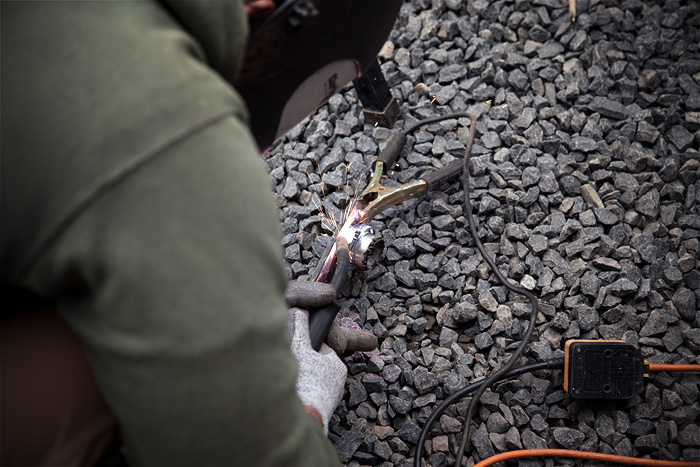 As with last week, we actually did a lot more than that…including head scratching, coffee drinking and other actual work but sometimes we were too busy doing it to write it down ;) 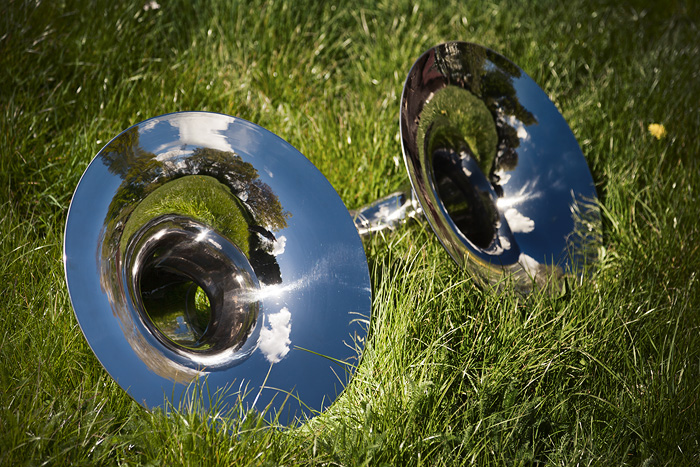 Week commencing 4th May
We made significant progress this week. Many things started to fall into place and many of those things you can only really assess once you put stuff together were tweaked accordingly. Gradually we are reaching the tipping point where it goes from rushing around trying to source stuff and work stuff out to just bolting it all together. That’s not to say that it will all work when we bolt it together and there is still a background chance of total failure but that’s always a feature of making ambitious new work. Sometimes making art is scary; not only in terms of getting it finished – for example, this week we drilled through a very expensive chair. EEK!

In addition to the development of the piece itself, we also had – at last – some positive discussions with someone who might video document it. Yay. 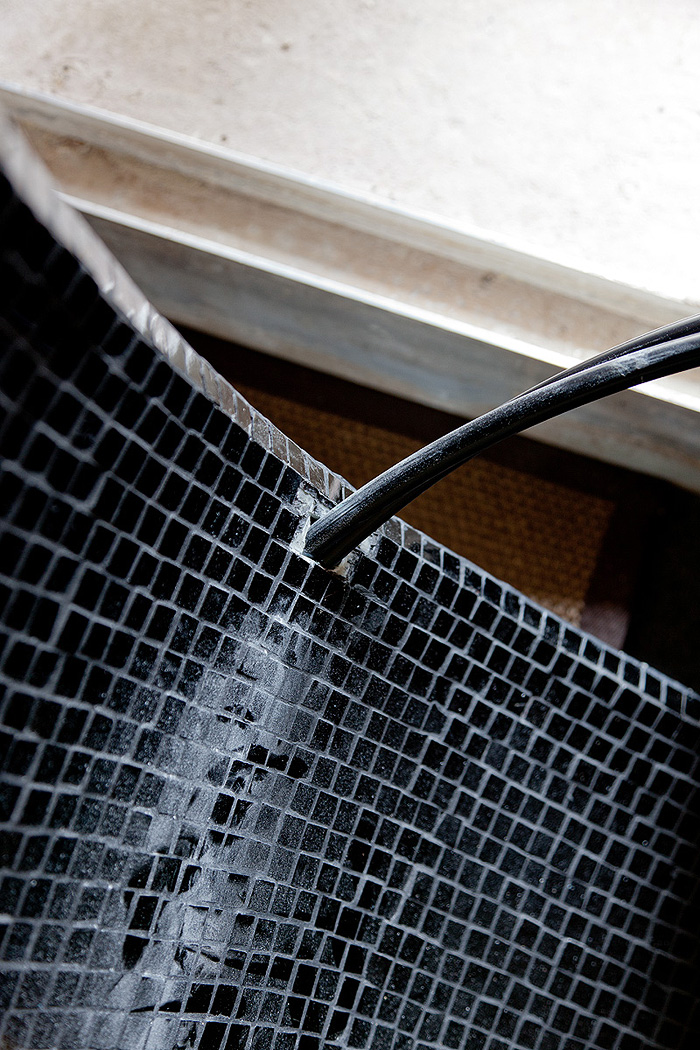 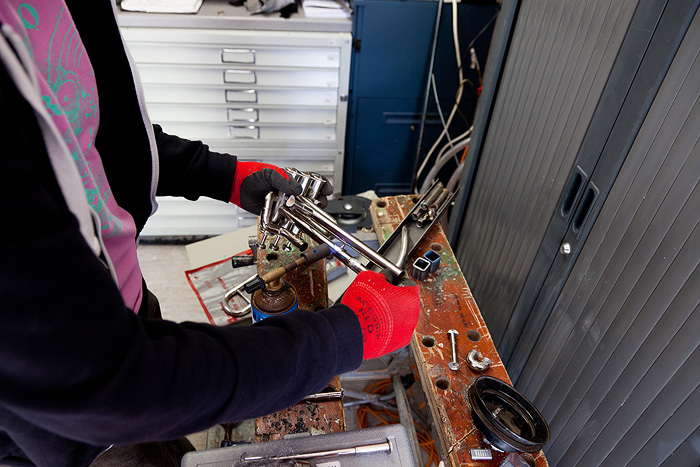 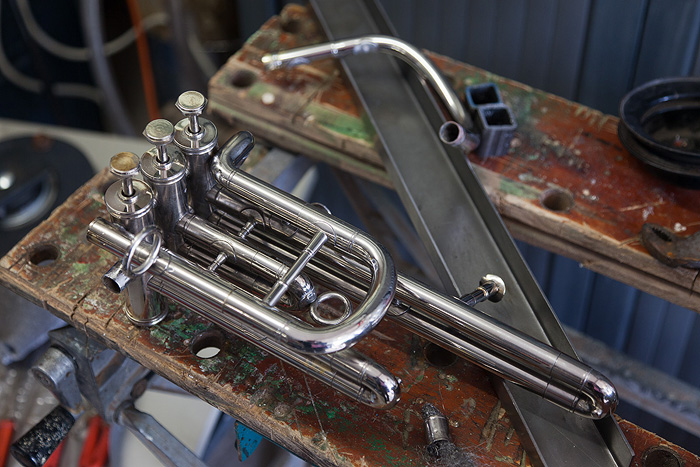 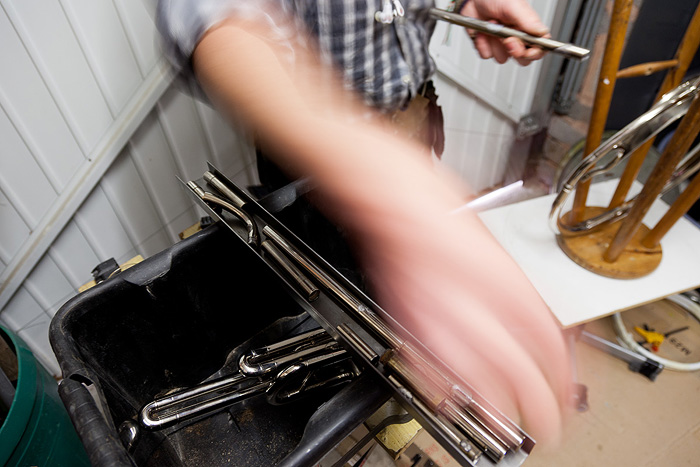 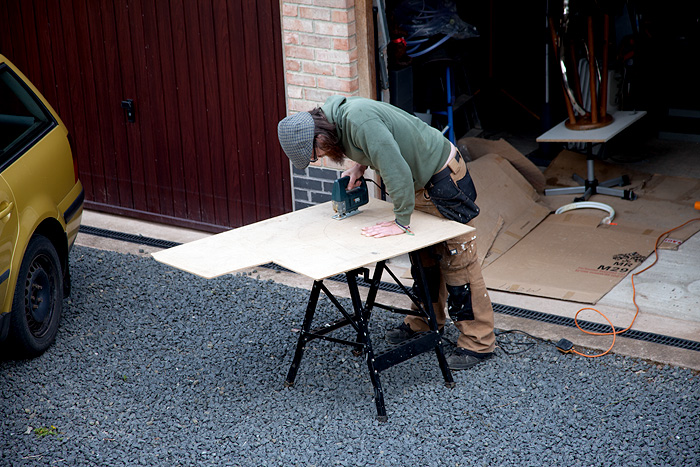 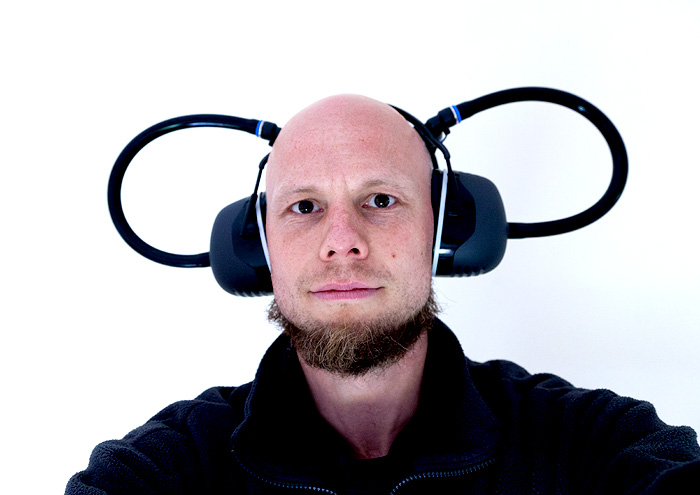 Each day we actually did a lot more than that, including head scratching, coffee drinking and other actual work but sometimes we are too busy doing it to write it down ;) 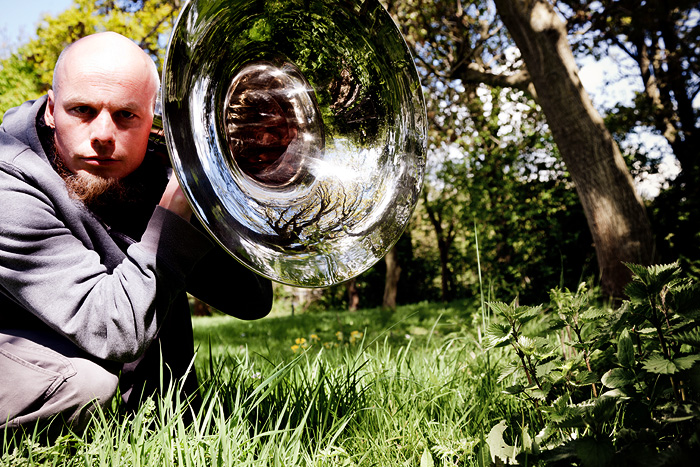 This is the first in a four-part series of blog posts to document the final stages of work towards the installation of my / MortonUnderwood‘s most ambitious sound art installation to date. I must confess that for a while now I haven’t felt the urge to spend time writing about my work; as you can see from the date of my previous blog post on here. There are various general reasons for this, from not wanting to spend my time in front of a computer to wondering who would be interested in reading this stuff anyway.

Where this project is concerned though, there is one other thing that has held me back from documenting it: fear. Specifically, fear that it won’t be completed on time and what I will be documenting is in fact a terrible failure. Suddenly, last week – with four weeks to go until the installation – I had a change of heart regarding this. This stems from the fact that I think the chances of failure are now somewhat diminished, that I am bound to documenting it as a condition of the funding I received, and crucially, that I feel documenting even total failure might be of interest and help to others. So here we go…the first of four blog posts documenting the creation of Amplification.

(Unlike the remaining blog posts on this, as the first, this documents the process so far; rather than just the week prior.)

The story so far…

As an introduction to the project itself, let’s start with some blurb from the press release:

Amplification is a stereo acoustic amplification system, developed to encourage deep listening to environmental sounds within a space. Users of the system will augment their listening through two large ear trumpets. In addition, they will be able to adjust the stereo field of what they can hear by swiveling each horn; creating a distinctive and unusual listening experience.

That’s the plan and I put this idea to the Arts Council, who duly supported the idea via their Grants For The Arts scheme.

I am so pleased to have received their support; and at the first time of asking as well.

BUT, as I know from years of running my own businesses, with every opportunity comes risk. Any step-change presents many challenges as well as openings…and that has been the story of this project so far.

The first thing my colleague David Morton and I had to do was make it a solid idea that properly sparked our interest. We played with a few ideas and prototypes before deciding on the approach outlined above. I suspect most people have seen or even used mono acoustic listening devices before and with David’s experience of using a mid-side microphone array we were confident we could create some interesting effects by making a stereo listening device, with a matched, stereo pair; where the user could alter the stereo field. It sounded easy enough at the time! 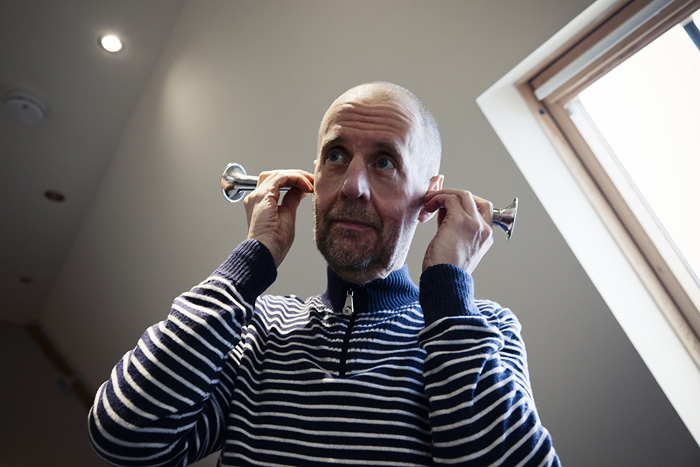 At the same time as developing a prototype of this ourselves, I started to look for firms to fabricate it and contacted someone I had used before about documenting the project. I anticipated that finding a fabricator might be hard but sadly even the chap who we had hoped would document it was unavailable, due to personal reasons.

In the end I wrote/drew a full specification for the piece in order to take it out more widely to fabricators. I was soon reminded of the benefits of cobbling together. In the words of one fellow artist I contacted regarding this, “It’s usually communication issues with commercial outfits in my experience, different mind-sets etc”. And so it went on…until one day, with time rather tight, we found a fabricator. Sadly, it took us two further weeks to discover they weren’t the right people for the job either, at which point we took the bold / scary decision to try and find another fabricator with only five and a half weeks left…

The only reason I feel able to write this now is that our new, and final fabricator, Tuba Phil (pictured below) and I are making reasonable strides now and will have something to present at the end of this month. I kick myself that I didn’t think of Phil before. I play in Collective43 with him but for some reason I didn’t consider him for this job until pretty late in the day. So far it has been a great pleasure working with him and I can see much good coming out of this in future. For one thing he acts as a conduit between what’s in my mind and the means of making this a reality…but also, we have a mutual respect and understanding.

One further thing I realised through this is that giving up the production of one of our pieces is going to be harder than I anticipated. Event pieces like A Word In Your Ear – where the idea was predominantly David’s, the box was produced by our friend Neil and all I did was manage the process and install the electronics – I had to play some part, beyond just the conceptual side of things. Maybe this will always be the case but I hope I will one day accept that the art is in the idea and you can happily let others create the piece itself, as they are probably better at that bit… 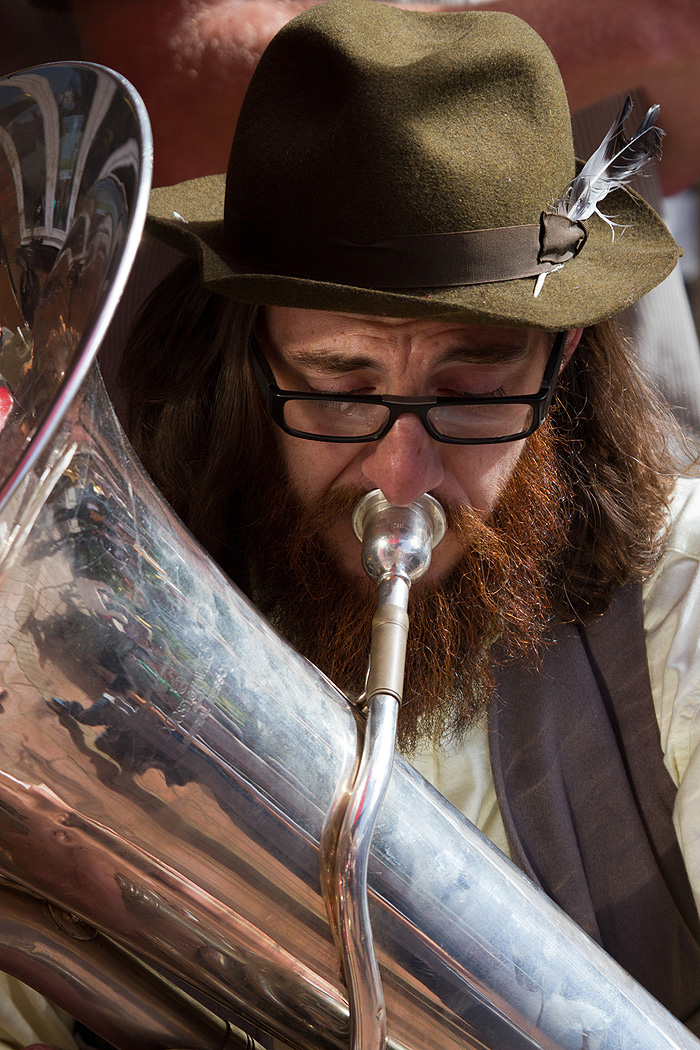